Matthew Smith, the author of the classic ZX Spectrum games Manic Miner and Jet Set Willy was at the Play Expo 2019 retro gaming event in Manchester to do a talk marking the 35th anniversary of Jet Set Willy. I was lucky enough to attend this event and had taken some of my old cassette covers with me, just in case Matthew was up for doing some signing after his talk. So at the end of the talk I legged it up to the stage, joining the unofficial queue of fans seeking autographs and selfies. Did I ask him to sign my covers of Styx, Manic Miner and JSW? Too right I did! 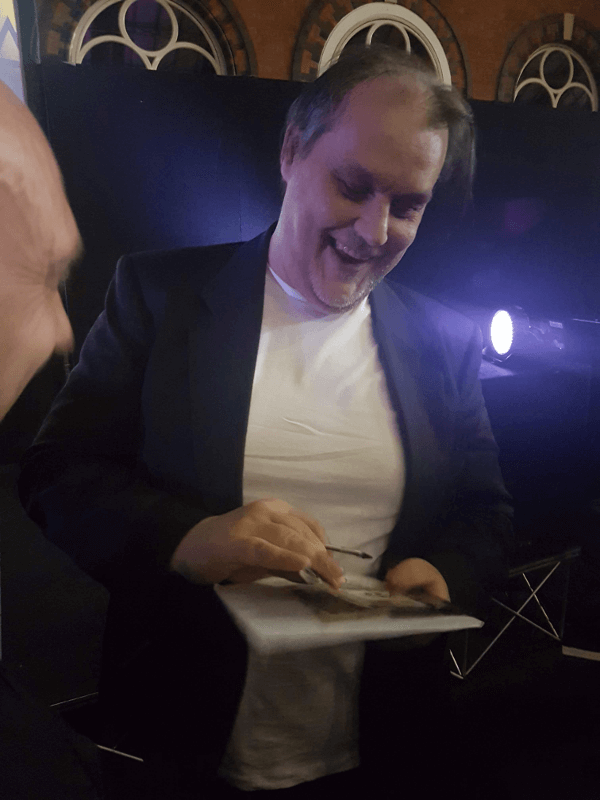 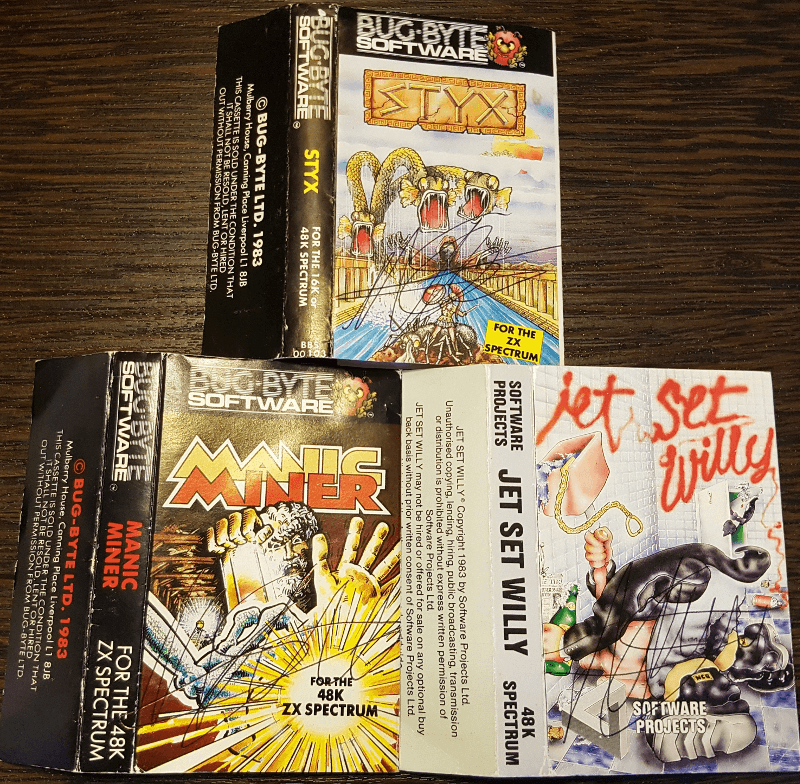 The next day (it was a 2 day event) I went to take a look at the Spectrum Next stand, and there was Matthew Smith checking out the yet to be released Next. Jim Bagley loaded up Manic Miner and Matt had a quick game. He didn’t get very far though. In fact he didn’t even collect one key! Mind you, he was getting pestered by fans at the same time.

At this point I asked him if I could take the obligatory selfie with him, which I was delighted to say he agreed to. We then got chatting about whether he fancied doing something for the next or spectrum. He said he had planned to make about 20 spectrum games back in the 80s, something like 2 to 3 a year, but after not getting paid for JSW his computers quickly fell into disrepair. He said he was working on something, or maybe he was just thinking of working on something; I couldn’t quite make out what he meant. Matthew did said he wouldn’t make another Miner Willy game. When I asked why he said that there is too much hassle over copyright. “I own the copyright, but I have to fight for it. So it’s just less hassle if I do something else”. It would be great to see another Matthew Smith game, and I’m sure he could raise all the funding needed with a kickstarter, but I don’t think I’ll be holding my breath…

I also asked him about Delta Tao One, which is the first game Matthew had published. It was on the TRS-80. He told me how he always developed on the TRS-80 because it had a decent keyboard and disk drives. He wrote both Manic Miner and JSW on the trs-80, and built an interface board to squirt the compiled code onto the spectrum. This allowed him to re-load the code onto the spectrum in seconds after a crash or code change. I told him that getting hold of a copy of Delta Tao One was nigh on impossible. He mentioned some website or other and was going to look on his phone, but the battery was dead. He did say if I managed to find a copy I have his blessing to take a copy of it.

I was 13 or 14 when Manic Miner and Jet Set Willy were first released. I was instantly hooked and I can honestly say those were the games, more than any others, that inspired me to learn about computers and programming. 35 years on and it was an absolute pleasure to finally meet and chat with one of my childhood heroes, Matthew Smith. An absolute legend.